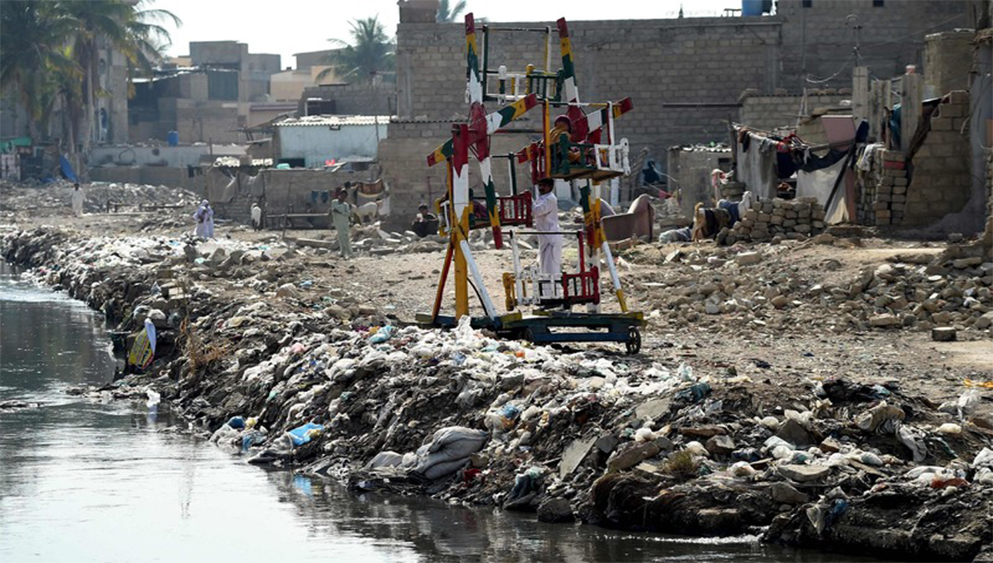 Waste Management Crisis in the city of Lights

City of lights and the older capital of Pakistan, Karachi plays a very vital role in the social, economic and political development of the country. Unfortunately, Karachi faces many difficulties. That has generally come about because of the impacts of massive increase in population, terrorism, increasing rate of urbanization and general government apathy for the city municipal issues.

Throughout the year we see that the garbage disposal crisis in Karachi has become one of the major issues of urban planning. As the population, urbanization and industrialization increased, garbage and filth all around the city increased exponentially. It is difficult to find a vast area or patch of clean land in Karachi. The garbage includes all kind of waste including domestic waste, construction debris and material waste, little mounds of rotten waste are found near food markets and plastic shopping bags are strewn everywhere. The plastic bags are especially a major issue as they are non-biodegradable.

Additionally, the expanding arrival of mechanical spouting and civil waste has contaminated the land and water bodies. Karachi, the nation's biggest city, delivers more than 12,000 tons of trash each day. Of this, exclusive 4,000 tons wind up at landfill destinations while the rest is scorched at purge plots, grounds, parks, and roadsides.

Karachi is still the economic and financial hub of the city but it has transformed from the substance of an urban Pakistan into a city of garbage. Tons and tons of waste is disposed on road corners, behind the mosques, close schools, and wherever possible. Urban waste creation isn't just a Karachi issue indeed, the World Bank gauges that urban waste is becoming speedier than the rate of urbanization over the world. By 2025, there will be 1.4 billion more individuals living in urban areas delivering a normal of 1.42kg of metropolitan strong waste every day more than twofold the present normal of 0.64 kg for every day. In 2005, Karachi was creating 9,000 tons for each day of waste. An unpleasant estimation by this segment proposes that per capita generation of waste in Karachi is 1.21 kg for each day. Therefore, a heft of private, mechanical and restorative waste is burnt on the day by day that produces lethal gases which could be adding to unsafe illnesses and diseases. According to a source, â€œFifty years ago the water creek in Ibrahim Hyderi in Karachi was so clear that one could see the fish, but today it is so lethally polluted that fish cannot survive in it.

Sindh Assembly passed the Solid Waste Management Board Act in 2014 which was intended to enhance coordination and utilize outsider contractual workers to "assume control administration of strong waste for the benefit of the Board". The administration control still lies with the Sindh government. The board issues tenders for specific occupations to temporary workers so as to deal with various types of waste crosswise over Karachi regions.

Two Chinese contractual companies were expedited to oversee garbage transfer in South and East locale of the city. In the East, the Chinese organization under contract was to contribute $7 million and send 96 trash accumulation vehicles, with more than 4,000 dustbins and compartments in the city. The contractual workers confirm that they will create power from waste also. This agreement is worth of 2 billion rupees. They were entrusted to lift trash from homes, paths, avenues, areas, connection and principle streets and take it to landfill destinations obvious. But these things are not practically been seen by the Sindh government because there is a pull of war amongst Sindh and city local government, presently battling the fight in court.

At the end of the day, Sindh government should surrender control of this to city local Municipal Corporation. As it is the responsibility of local government to keep the city clean and maintain proper waste disposal system and sewerage management. To make the city clean, people of Karachi should also take responsibilities.

Unfortunately, the people of this city have only added to the problem. Shopkeepers do not hesitate to throw their litter even in front of their own shops. So, the first step should be taken by the people themselves. And that is to not throw garbage on public places. Government should initiate public campaigns to educate people about the adverse effects of littering. After that the local government should take responsibility to clean the area on daily basis. So that mounds of rotten garbage are not formed. They should also introduce garbage buses that goes to every town of the city and collect the garbage.

In order to bring back the glory of Karachi everyone needs to contribute. Overall implementation of the local body system and check and balance on the people should be satisfactory, both in quantitative and qualitative terms. Governments should learn from the past experiments and improve the waste management in Karachi. Proper measures and better selection of cleaning projects can help recover the situation.