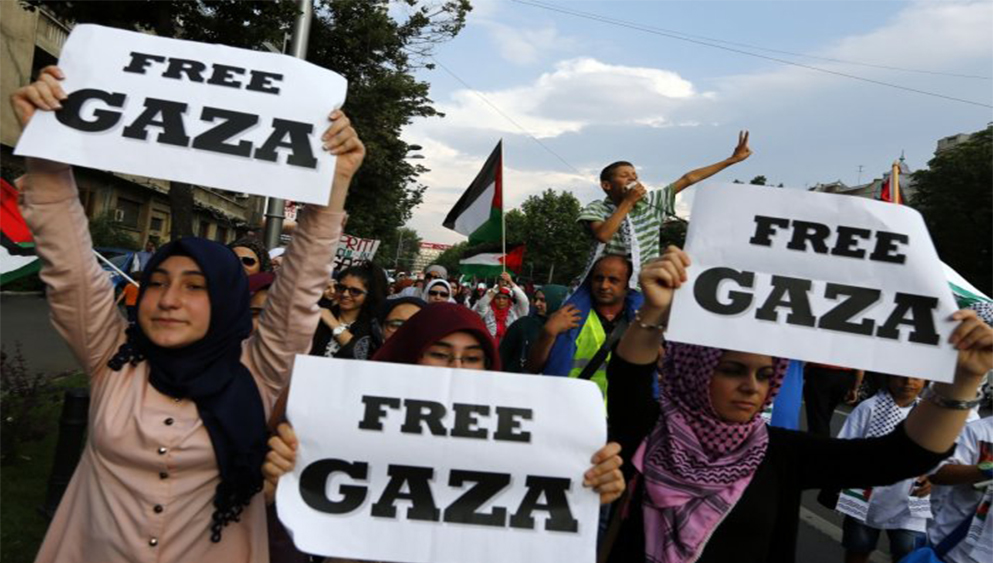 The Middle East always makes it to the headlines these days. From Syria and Iraq to Yemen and Palestine the news is all about mass killings perpetrated by state or non-state actors. However, yesterday events in besieged Gaza were received more as a shock due to the large scale of deaths and injuries

An attempt by Palestinians to cross the border fence which separates Israel from Gaza turned violent as Israeli soldiers opened rifle fire in response to Palestinian demonstrations. Hence, Monday, 14th May, became the bloodiest day since the campaign of demonstrations began seven weeks ago to protest Israel economic blockade of Gaza. Tens of thousands of Palestinians took part in the Gaza protests. Protests also took place on the West bank where the protestorsâ€™ main focus was the move towards the embassy. Israeli soldiers used barrages of tear gas and even opened fire to prevent protesters from entering Israeli territory. By late in the evening, 58 Palestinians, including several teenagers were killed and more than 1,350 were wounded.

HAfter the biggest one-day toll of Palestinians killed by Israelis since Israel 2014 invasion of Gaza, Israel has received widespread international anger over the use of lethal force against mostly unarmed Palestinian protesters

According to Israel, their soldiers had exercised restraint on the Palestinian protestors and had they crossed into Israeli territory, many more protestors would have died. However, Doctors Without Borders, an international medical charity, said on Friday that it had treated more Palestinians at its Gaza clinics in the past month than during the 2014 conflict and that some of the exit wounds from Israeli ammunition were â€œfist-size.

Israel use of force on Monday just did not include infantry with rifles but also included fighter jets and a tank to repulse what it said were unsuccessful attempts by Hamas to have armed fighters slip across the Gaza border.

The demonstrations were originally meant to protest the economic blockade by Israel of Gaza, the impoverished region governed by Hamas. Egypt and the Palestinian Authority, based in the West Bank, have joined in the economic squeeze that has left Gazans increasingly desperate. Palestinian officials demanded international action against Israel and vowed no letup in the demonstrations.

Turkey declared a three-day national mourning period over the killings and recalled its ambassadors to Israel and the United States for consultations. Turkey has long criticized Israel policies toward Palestine and has strongly opposed the American Embassy relocation to Jerusalem.

Even as Palestiniansâ€™ anger erupted, American and Israeli officials celebrated President Trump move of the embassy to Jerusalem. Previous administrations in Washington, like the governments of most American allies, had been unwilling to make the transfer, insisting that the status of Jerusalem needed to be resolved in a peace agreement with the Palestinians

In a speech at the ceremony where the decision was made, Jared Kushner, Donald Trump son-in-law, also spoke of a resolution as a response to generations of conflict.

â€œWhen there is peace in this region, we will look back upon this day and will remember that the journey to peace started with a strong America recognizing the truth, he said. However, Prime Minister Benjamin Netanyahu of Israel sounded more triumphant and defiant than conciliatory. â€œWhat a glorious day, Mr. Netanyahu exulted. â€œRemember this moment! This is history! President Trump, by recognizing history, you have made history.

â€œWe are in Jerusalem and we are here to stay, he said. â€œWe are here in Jerusalem protected by the great soldiers of the army of Israel and our brave soldiers are protecting the border of Israel as we speak today. The shift of the United States Embassy to Jerusalem reflects the close alliance that has developed between Mr. Trump and Mr. Netanyahu, which according to Palestinian leaders, has worsened prospects for peace.

Many Israelis see the relocation of the embassy as simply acknowledging that Jerusalem is Israel capital. But Palestinians, who hope to see the eastern part of Jerusalem become the capital of a Palestinian state, see the move as an abdication of any indication of American impartiality in determining the region future

The timing is no accident â€” May 15 is observed by Palestinians as the anniversary of what they call the nakba or catastrophe. It marks the expulsion or flight from the newly formed Jewish state of hundreds of thousands of Arabs in 1948, who were unable to return or reclaim the property they left behind.

Has India learned from Israel?

People in South Asia are not alien to the types of atrocities committed by the Israeli forces against the unarmed Palestinians. India in recent years has used similar tactics against unarmed Kashmiri protestors in the Occupied Valley. Only a week ago, 14 Kashmiris were killed in a crackdown by Indian forces. Indian forces have also started using pellet guns which have blinded hundreds of Kashmiris in recent years

Rape, torture, extra-judicial killings, missing persons etc. are some of the atrocities committed by Indian forces in India Occupied Kashmir. Kathua rape case is the most recent example. Indian occupying forces have also killed over 1,00,000 Kashmiris since 1989. Indian atrocities became more visible in 2016 after the assassination of Kashmiri freedom fighter Burhan Afzal Wani. When one observes the methods and tactics employed by Indian forces in IOK, one can find several similarities between the Indian and Israeli tactics. This can be due to the recent enhancement of strategic partnership between India and Israel.

The military partnership between India and Israel is also something which is worrying. India has acquired state of the art weaponry from Israel which it has used to suppress civilian protests in Kashmir. Various reports also indicate that India has employed Israeli tactics in Occupied Kashmir. The scale of violence in Occupied Kashmir and Palestine in addition to the employment of violence by India and Israel respectively make one realize that both states could be acting in a synergy. Anti-riot tactics, indiscriminate use of force and massive employment of forces to simply suppress peaceful protests, all these similarities perhaps may indicate that India is following in the footsteps of its partner Israel.